Double Negative is a piece of land art located in the Moapa Valley on Mormon Mesa (or Virgin River Mesa) near Overton, Nevada. Double Negative was completed in 1970 by the artist Michael Heizer.

When experiencing Double Negative there are no signs to the site or curatorial descriptions set in letraset on the wall, you define the work and create your own experience as an active participant. What you get out the work is whatever you put into your experience. Without making a value judgment, either you see the work and feel the connection to the landart or you don’t. You’re completely left to your own definition. The transformation of the work makes visiting the site exhilaratingly because you realize you are changing along with the masterful art. 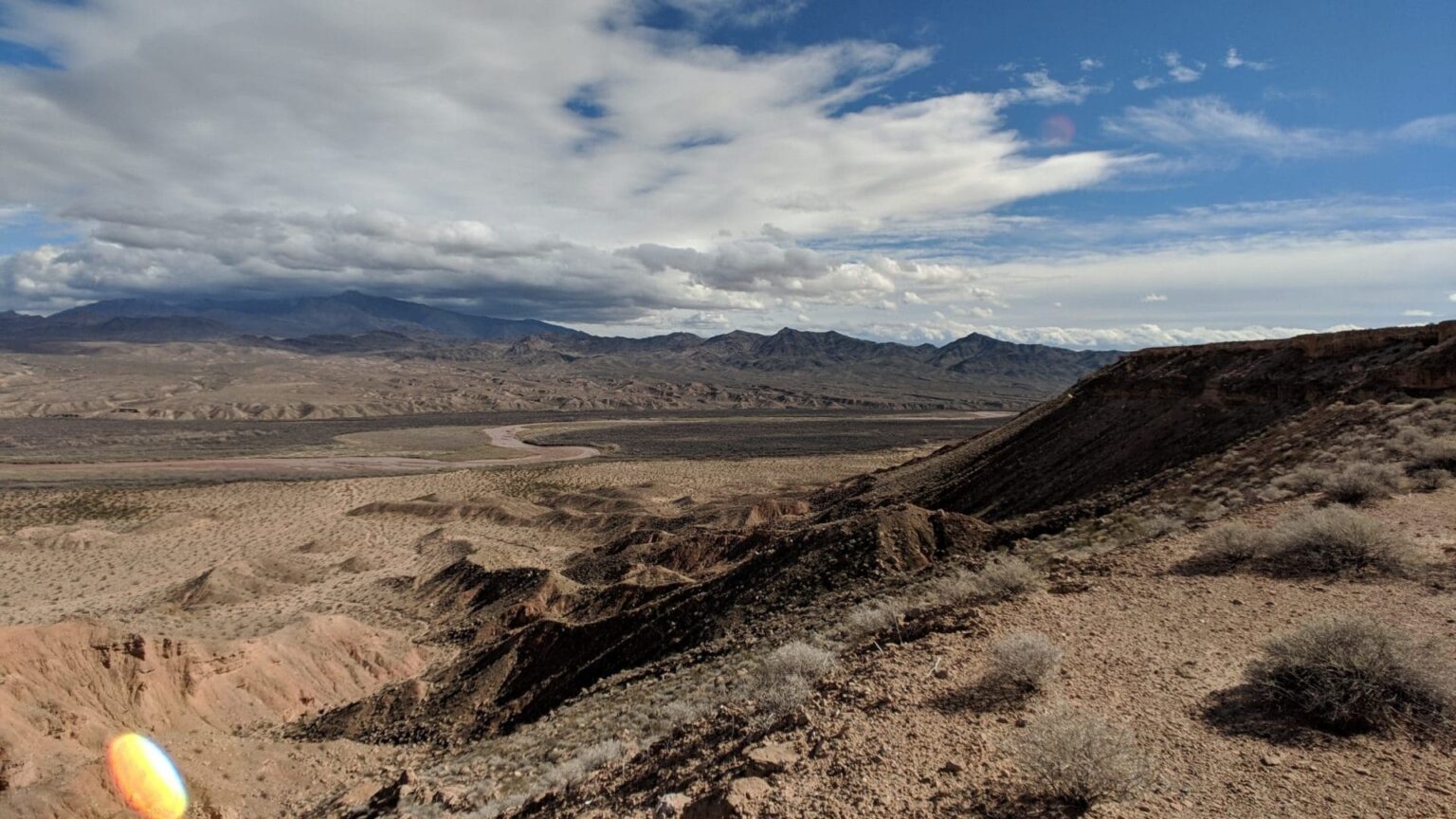 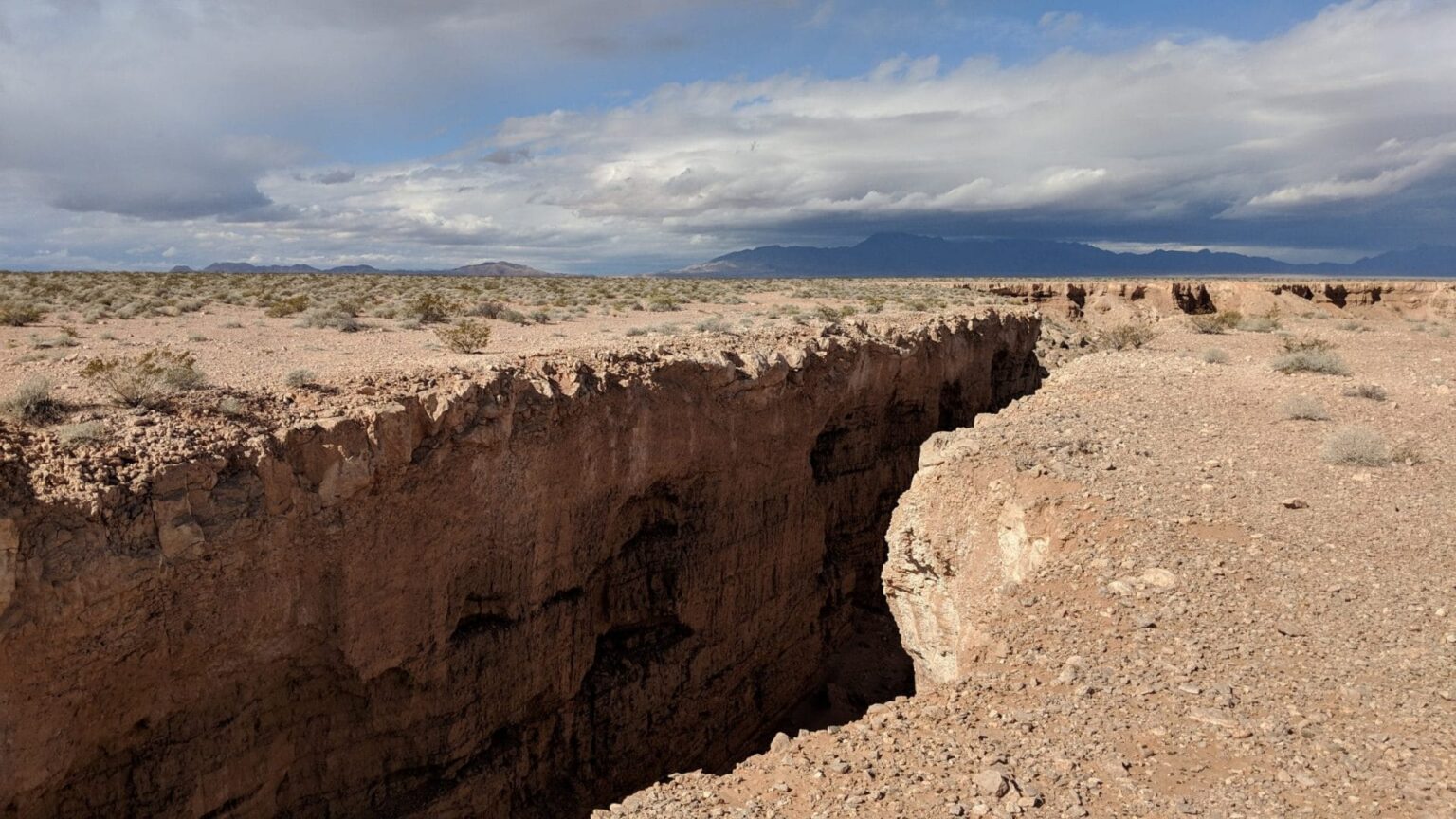 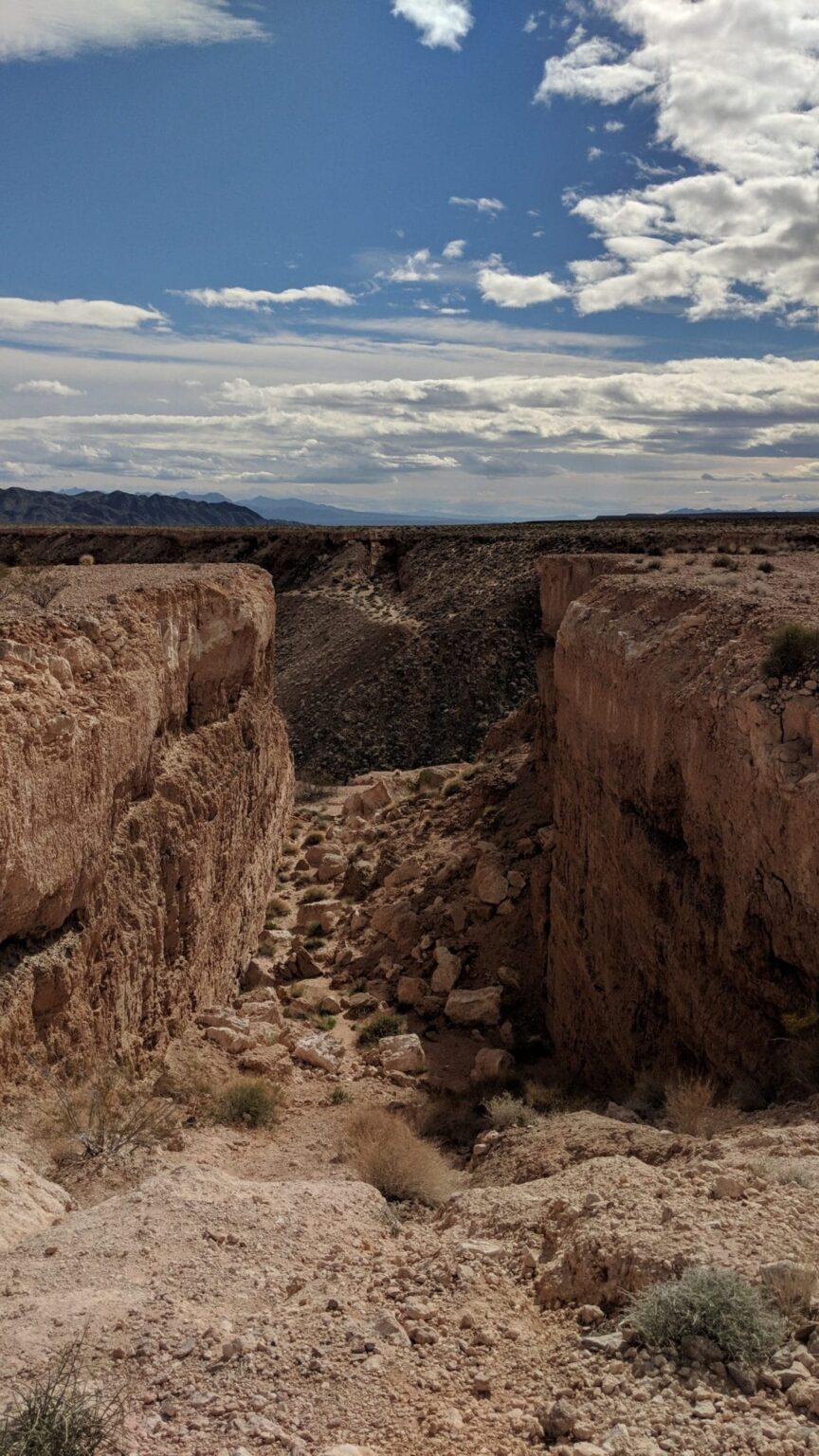 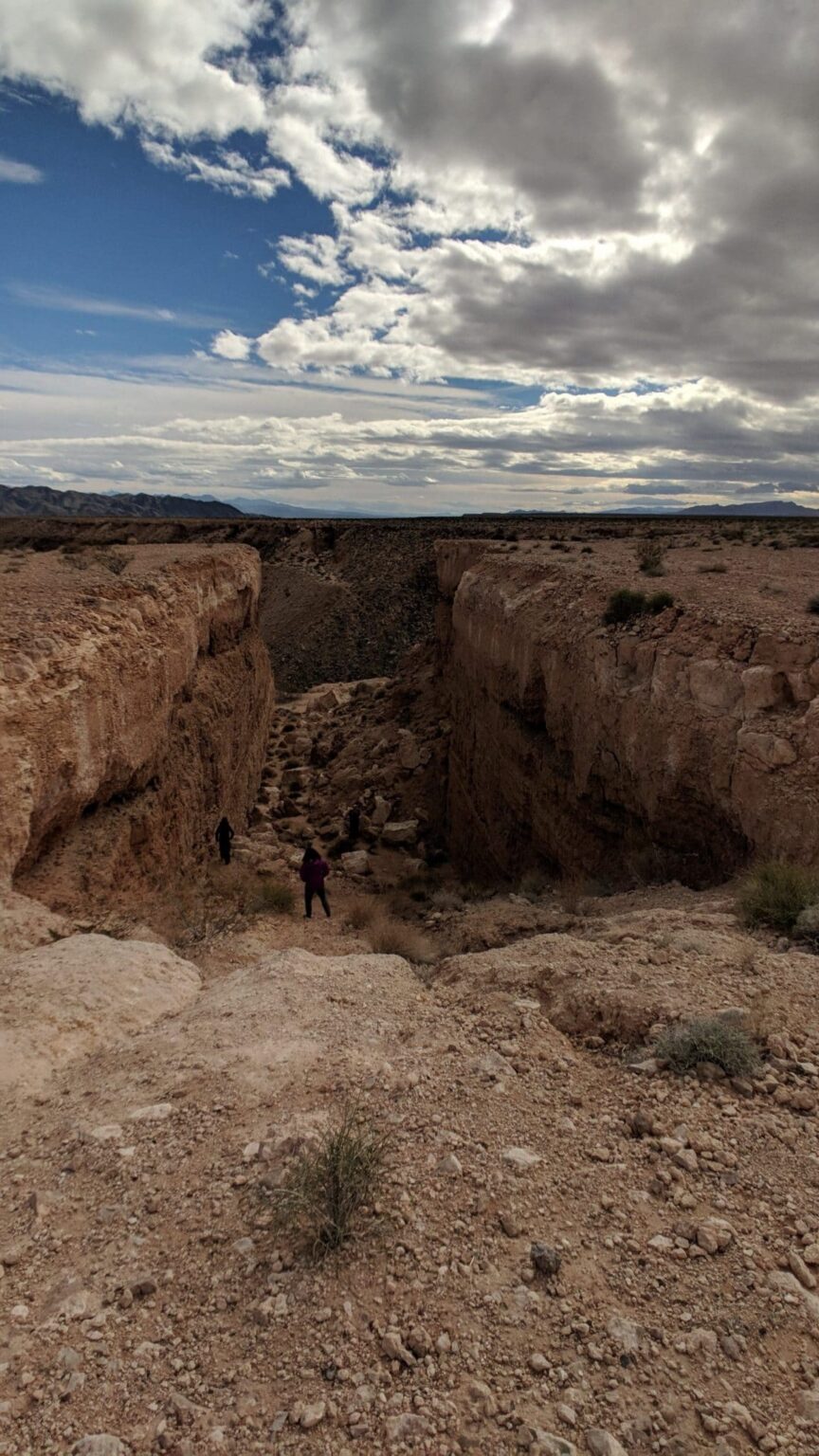 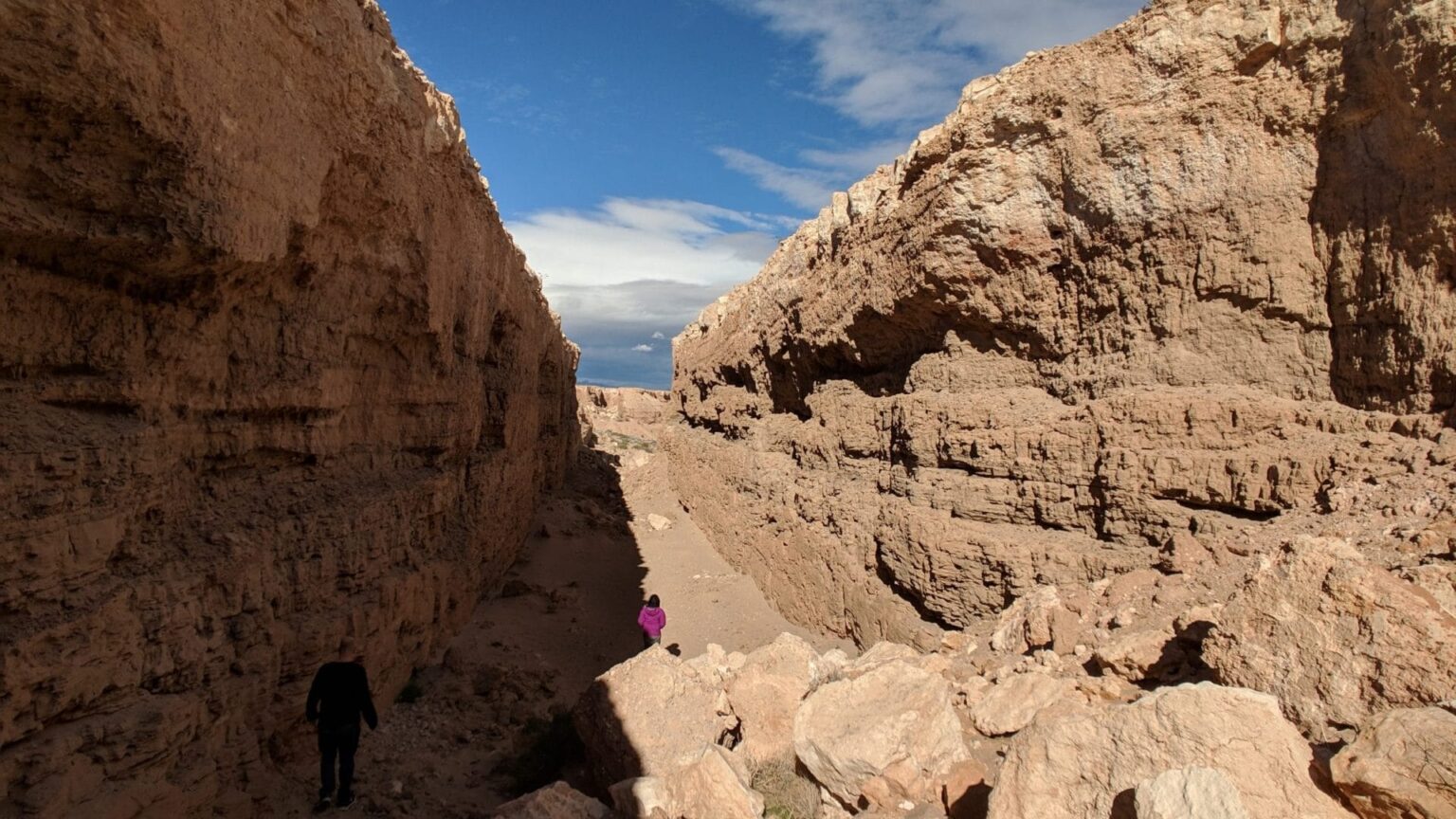 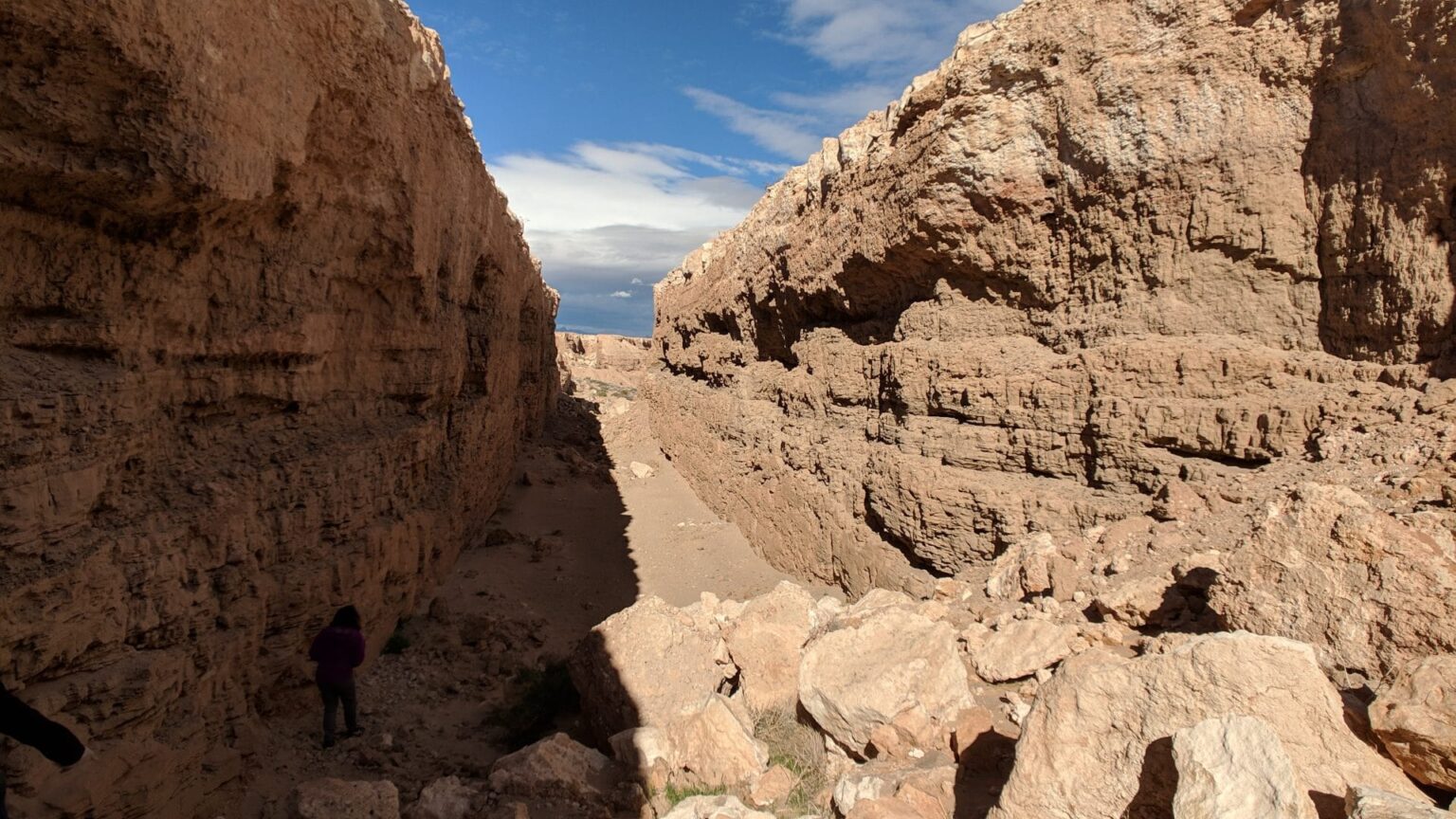 The work consists of a long trench in the earth, 30 feet (9 m) wide, 50 feet (15 m) deep, and 1500 feet (457 m) long, created by the displacement of 244,000 tons of rock, mostly rhyolite and sandstone. Two trenches straddle either side of a natural canyon (into which the excavated material was dumped). The “negative” in the title thus refers in part to both the natural and man-made negative space that constitutes the work. The work essentially consists of what is not there, what has been displaced.

Planning a visit to Double Negative?
Here’s what you need to know

It really is in the middle of nowhere. Prepare for conditions of extreme heat with no shade (especially in the summer months) – always bring water, some snacks, a hat, and sunscreen. It does get very windy with gusts blowing tumbleweeds and small pebbles that pelt you from seemingly every direction.

Use caution, avoid traveling alone, and notify an outside party of your departure and estimated arrival time for safety.

Double Negative is located about 80 miles from Las Vegas. It’s situated on the Mormon Mesa in Overton, Nevada.

Admission to the Double Negative site is always free and there is open access all day and night year round.

So where the heck is it exactly?

The nearest major landmark that is relatively close to Double Negative is the Overton Airport:

If starting your adventure from Los Angeles, allow at least seven hours for travel. Keep in mind that the last 45 minutes is totally on unmarked dirt roads and some seasonal roads. A four-wheel drive vehicle with a high clearance and sturdy tires is recommended.

Double Negative is located in a very remote area of the Nevada desert, but it can be visited relatively easily from Las Vegas and Los Angeles. The journey requires travel on unpaved, rocky roads, so a vehicle with high clearance and four-wheel drive is recommended.

Once on Overton, turn left onto Cooper Street, which leads to the Overton Airport. This will be a sharp left shortly after the Maverick Gas Station, Moapa Valley Community Center and Las Vegas Met. Police Station (on left) and the Post Office (on right).

Head towards the Overton Municipal Airport

Head towards the mesa

Drive to top of the mesa

Proceed up the road to the top of the Western edge of the mesa. As you pass the dump, it will turn into a dirt road.

Once at the top of the mesa﻿

When you reach the top of the mesa, note mileage and continue straight across the mesa (do not go onto the immediate right or left road).

After traveling 2.6 miles, keep your eyes to the left and make your first possible left (at 2.8 miles) onto a small dirt road, which is easy to miss. Note mileage again.

Double Negative is located in the third notch

Congratulations! You made it to Double Negative

After traveling 1.3 miles, you will come to a fork, which leads to each cut of Double Negative. Bear right to the south cut. The left fork leads to the North cut.

Allow at least a half hour before sunset to start leaving Double Negative as retracing one’s steps is very confusing. Go out to the main dirt road, turn right and go back down the mesa.

For more information about Double Negative check out

State of Theater in Los Angeles

When people think of visiting Los Angeles, the theater isn’t exactly on the top of their lists. “L.A. Theater” doesn’t come close to landing on this list. It not only gets trounced by moist roast beef sandwiches but also Pink’s Hot Dogs and Langer’s pastrami! But let’s face it. We’re not New York City or London. And yet, there’s an awful of lot theater happening here.

Concrete architecture is often associated with cold, dreary, heartless, foreboding, institutional buildings. This ancient building material, first used by the Romans, when used right can appear to be lighter than air. Concrete buildings can welcome you to experience spaces in…
END_OF_DOCUMENT_TOKEN_TO_BE_REPLACED
06 Feb

Los Angeles Theater: How To Make A Mecca When people think of visiting Los Angeles, the theater isn’t exactly on the top of their lists. Search around the Internet and you’ll find there’s a genuine consensus why tourists come to…
END_OF_DOCUMENT_TOKEN_TO_BE_REPLACED

Camping on the Greenland Ice Sheet

My very first camping trip ever and we decide to go camping on the ice sheet in Greenland! We started our trip in Kangerlussuaq, headed toward the Russell Glacier and finally hiked onto the ice sheet. Finding our way to…
END_OF_DOCUMENT_TOKEN_TO_BE_REPLACED
11 Jul

If the success of a socially conscious play that explores unconventional elements of the arts and relationships is its ability to make the audience think than The Designated Mourner triumphs. Told through three interwoven monologues, the Orwellian political story is…
END_OF_DOCUMENT_TOKEN_TO_BE_REPLACED
28 Jun

MasterClass with Felix – Seeing Snow For the First Time

In this episode of MasterClass with Felix: Our Mexican rescue Felix sees snow for the very first time in his life. It’s so fun rediscovering “firsts” with our dog Felix. The exuberance and pure joy at discovering something that was…
END_OF_DOCUMENT_TOKEN_TO_BE_REPLACED